Singer, Simi has come out to explain why she has been speaking up for women lately.

This comes after the singer came out on Sunday, August 22 to fireback at a man who slid into her dm to blast for her always involving men in her posts.

The mum of one had shared a post on her Instastories in which she faulted the public assumption that women who hype and praise themselves are cocky. She opined that if a man hypes himself, people would describe him as a Chairman but think differently when a woman does same.

After the male Instagram user insulted her, she dragged him back on her instastories. 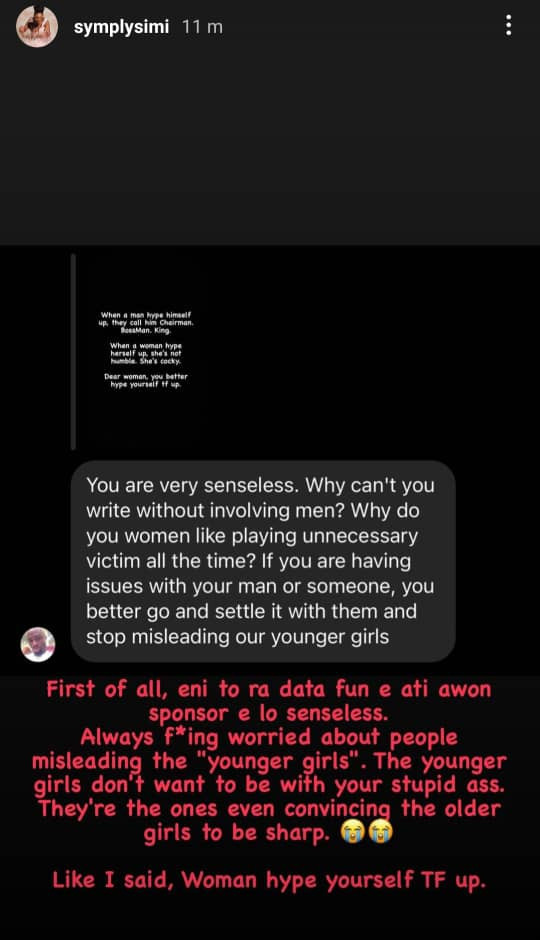 Late Sunday night, August 22, Simi took to her instastories to defend her stance on speaking up for women especially after getting lots of criticism on social media.

According to Simi, majority of women are oppressed by men, while the minority like her aren’t oppressed, and have a duty to speak up for the less privileged ones.

She also opined that any man who feels attacked or angry by her posts is guilty of oppressing women’s rights.

“Why are you always talking women this women that, Simi’s own is too much”. Let me give you perspective.When we complain about Nigeria and the government tells us to shut up, we don’t shut up. We can’t afford to. Because the people are still oppressed. It doesnt mean all Nigerians are suffering, but majority are. It’s the same for women we continue to speak because majority of women are still oppressed.

Some women have it pretty good. I know I have it much better than most women. BUT IM THE MINORITY! And even at that I know men with the same skill set as me and other women have it better. It’s not fight it’s just true.

When Nigerians are complaining, and using developed countries as example we don’t expect Canadians to come and say ‘why are Nigerians always complaining their own is too much’

Why are you so annoyed? If you are a man and don’t do these things then I’m not talking to you! Why are you angry?

Treat women better doesn’t mean treat men worse’.Because the women in your compound or your sisters are better off doesn’t mean everyone is.

The fact that you got food on your table doesn’t mean everyone is eating ffs.Speaking for women is not automatically attacking men. If you feel attacked it’s because you are guilty. it’s not rocket science.

I don’t want men to have less respect or value. I WANT WOMEN TO HAVE MORE!

Some people are really scared to tell their opinion. Some don’t believe they can be supported by anyone. That is why we have flashmobs like #metoo and others.