Construction on the highway began years ago. By 1978, it was hoped that work on the road would finish a year before, but because of the scale of the undertaking, the contracts were extended. The highway was constructed to replace roads which carried the heaviest traffic in the country. Brigadier Shehu Musa Yar’Adua praised the project.

The Brigadier formally opened the new highway, which was the first rural expressway in the country.

The road cost a total of 170 million naira (nearly 266 million dollars at the time). And to recover at least part of that cost, and to pay for its upkeep, road users will have to pay a toll. Even at the opening ceremony, Brigadier Shehu Yar’Adua led the way in paying for the service the new expressway offers."

“The expressway which we are about to open is one of the finest of its type by any standard. Your convenience, comfort and safety have all been incorporated in the highest standard of its design and construction. It does seem however that the better the road, the greater the death toll. The reported deaths on highways rose from 4,537 in 1973 to 8,000 in 1977, giving us a daily average of about 22 deaths. We all know that these are caused by excessive speeding, lack of proper maintenance of vehicles, drunkenness and a complete disregard for highway rules and regulations. I hereby appeal to all road users, and in particular, motorists, to obey highway rules and regulations, to have more respect for their lives and show care and consideration for others. This country has paid very substantially for your comfort and safety on this expressway so please do not make it a one-way ticket to death.”

See the footage of the Lagos-Ibadan Expressway being opened by Brigadier Shehu Musa Yar’adua: 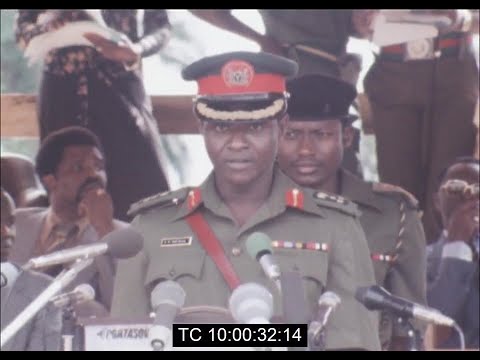 Search and license clips from Reuters vast archive of news video footage, dating back to 1896