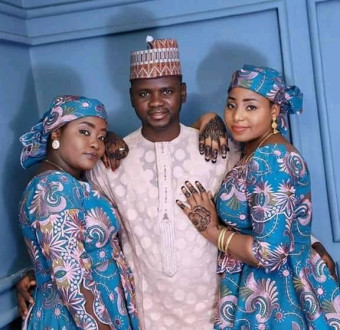 A 37-year-old man Babangida Sodiq Adamu has shared his experience after marrying two wives on the same day.

Adamu who outlined the benefits of marrying two women in an interview with BBC Pidgin, said he enjoys more than men who married only one wife.

The man who stated that everything he enjoys is double-double, disclosed that he wakes up every day knowing that he has two women who love him, care for him and will also cook for him. He added that there is more blessing from marrying two wives both physically and spiritually.

His two wives, Mariam and Memuna also disclosed that they decided to marry him because they love him and after knowing that him marrying more than one wife is allowed in Islam. They also described him as a caring person who is also unbiased.