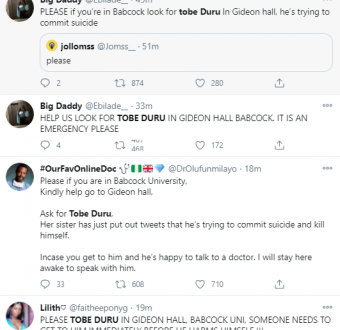 His sister claimed the undergraduate was making an attempt on his life and she pleaded with anyone close by to check on him in Gideon Hall.

As concern for Tobe intensified, a Twitter user gave an update, saying: “I’ve spoken to an authority in school and TOBE DURU HAS BEEN FOUND. Thank you guys.”

Another tweeted: “I reached out to my Aunt who is a staff, The DSA has gotten in contact with TOBE DURU, and he is fine atm.”

The reason for his alleged attempt on his life was not given.