While we offer drinks and kola nut to our visitors, the Namibia welcome their guest by offering their wives. Adultery is of no concern to the Namibia men.

When it comes to matters of the heart, it is not on base logic, they are deeply connected with emotions they are fragile, tender and must be handle with ultimate care.

Every man create a territory within his heart and his wife is at the centre, any invasion into that territory will ensue trouble, and hearts are bound to be shattered. But this is not applicable with the Ovahimba and Ovazimba tribes in Northern Namibia.

While the whole world may attack their cultural practices that they have upheld for a long, enduring time, the people are very proud of their ways.

In the instance that a visitor, or a friend visits, he is given the “Okujepisa Omukazendu” treatment. The man shows his approval and pleasure of seeing his guest by giving him his wife to spend the night with.

As the guest, or the friend spends some quality time with the wife, the husband goes to sleep in another room. In the scenario that there is no extra room, the husband gets to sleep outside.

It is a culture many may find quite hilarious but it is one that the Ovahimba and Ovazimba are extremely proud of. Some decide to call it “wife-swapping”. Over the years, it has sparked fierce debates in the country.

The practice of offering a wife to a guest is upheld nowhere else except in the Kunene and Omusati regions in Northern Namibia. 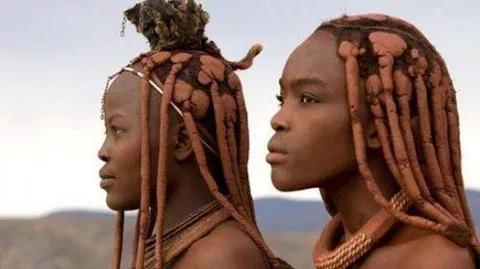 The tribes are nomadic, and status is entirely based on the number of cattle one has. The people are polygamous and the girls get married off as soon as they reach puberty.

The red skin is what familiarizes these people with the world. The red colour seen on their skin is called, the “otjize” paste ( a combination of butterfat, omuzumba scrub and ochre) and its function is to protect their skin from the sun and insect bites. They have resisted the trappings of modern life.

Back in 2014, a Namibian legislator sought to have the cultural practice enshrined in law.

In a country with one of the world’s highest HIV infection rates, this raised a lot of eyebrows. But the Ovahimba and Ovazimba tribes defend their cultural practice, saying it strengthens their friendships and prevents promiscuity. “It’s a culture that gives us unity and friendship,” said Kazeongere Tjeundo, a lawmaker and deputy president of the opposition Democratic Turnhalle Alliance of Namibia. Despise the advent of civilization, some culture and traditional system are resistance to modernization.

What is your opinion about the culture of the Namibia?