A 40-year-old drank who more than 10 bottles of beer in one night, fell asleep without going to the bathroom and woke up in excruciating pain. He slept for 18 hours and when he woke up his bladder exploded.

The man, identified by his surname Hu, was admitted into Zhuji City People’s Hospital of Urology in China after sweating and turning pale, according to Weixin’s reports.

His family rushed him to the hospital after he had slept throughout the day and woken up with abdominal pains.

The deputy chief physician of the Department of Urology, Zhu Lingfei explained that Hu could not even lie on his back after his abdominal muscles became tight and painful to touch.

He tried but was unable to urinate due to the pain which led to several failed attempts.

A CT scan revealed that the man’s bladder had “exploded” and caused a rupture. He was taken for an emergency operation in an attempt to repair the bladder as quickly as possible.

Medics explained that alcohol can suppress the nerve centre which dulls the feeling of urination.

Once full with urine, this, coupled with the bladder being surrounded by fat and bone can lead to the wall becoming thinner and result in a rupture.

According to the NHS, a normal bladder in a healthy adult can comfortably hold a pint (500ml) of urine and should be emptied every three to four hours.

"You should be urinating every four to six hours. If you’re always holding your pee in for too long, there are consequences,” Dr Lauren Streicher said.

Lauren added: "Pelvic floor muscles contract in a coordinated fashion to help you either release pee or hold it.

“But if you’re continually holding urine, you can end up with some real dysfunction of your pelvic floor muscles.” 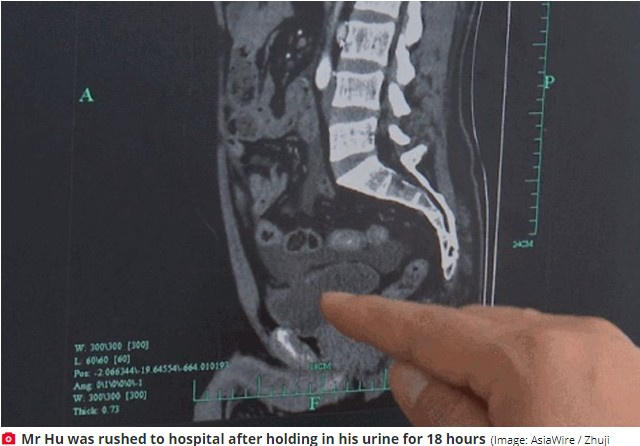 E good for am.