At around midnight on Friday, concrete barriers were set up at the mouth of the 11.8km Third Mainland Bridge in Lagos. The barriers signaled the beginning of repairs of the 30 year-old bridge and its partial closure for the next six months. 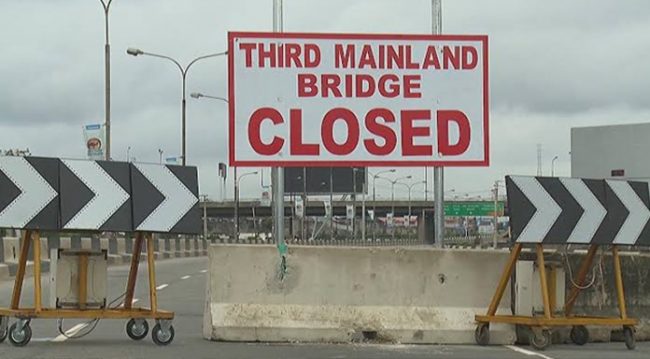 First location to be blocked was the outbound multi-lane at Adeniji Adele, which carries traffic from the Lagos island to the Lagos mainland at Oworonsoki.

The barriers will be in place till noon Saturday, when it will be opened for traffic. Simultaneously, some other set of concrete barriers will block traffic from Oworonsoki end, going to Lagos.

The blockade will also be in place till midnight, when it will be opened for traffic coming into Lagos

The alternating open and close is a rhythm Lagosians plying the bridge must master in the next six months as the almost 30 year-old bridge goes into repair mode.

The Federal Controller of Works, Olukayode Popoola, explained the rhythm to Channels TV:

“In the morning when you are going to resume your work, right from Oworonshoki, you use the same line that you normally use to go and work. “By 12 in the afternoon, we close this lane so you can now divert. We have created diversion as you can see it,” he said.

Minister of Works, Babatunde Fashola explained that the maintenance of the busiest bridge in the country was aimed at replacing damaged components for a better motoring experience.

The maintenance is to be carried out on a length of 3.5 kilometres out of the 11.8 kilometres of the bridge.