Help is on the way” ---gov. udom emmanuel to nigerian workers on labor day

Originally published at: HELP IS ON THE WAY” —GOV. UDOM EMMANUEL TO NIGERIAN WORKERS ON LABOR DAY – OgbongeBlog 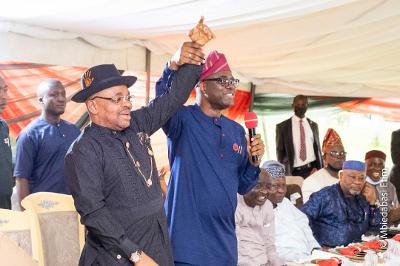 “Tell Nigerian workers, indeed all Nigerians, that help is on the way. I have been moved by the cries of our people to join the presidential race. My passion is to bring my capacity and capability to bear on the economic life of this country to turn around a comatose economy to the benefit of all Nigerians. I am trained. I am tested. I understand the economy. I know the various languages it responds to. My track record in both the private and public sectors bears me out. I promise Nigerian workers that I as president of this great country will partner with them to turn the economy around.

Under my administration, workers will get their due. They will occupy a prime place in my consideration of policies and programmes”

Gov. Udom then called on Nigerian workers to stop agonising and bemoaning their situation and circumstance but should henceforth organize behind a man who can turn poverty into prosperity and restore the country’s lost glory. “I know what to do to arrest the slide in the value of the Naira, to escape the debt trap that is strangulating the economy, to create jobs, and bring about a vast improvement in the decrepit state of infrastructure within the shortest possible time. If only with the success I have recorded with Ibom Air, where the country as a whole has failed, you know I have capacity and capability. If only with the fact that Akwa Ibom now manufactures and exports syringes overseas, you know I have the capacity to stop Nigeria’s over-reliance on oil and diversify the economy. If only with the fact that little Akwa Ibom is second only to Lagos State in attracting Foreign Direct Investment, you know that I know how to attract investment into Nigeria. Workers of Nigeria, stop agonizing! Organize and partner with a man who has the passion to make Nigeria great again. Udom Gabriel Emmanuel will wipe your tears. I wish you a happy workers day even as I extend my hand of fellowship to you. Grab it! And together we shall make Nigeria great again! May God help us all!” Meanwhile, Governor Udom Emmanuel of Akwa Ibom State and leading presidential aspirant of the People’s Democratic Party (PDP),on Saturday 30th April 2022, scaled party screening conducted for presidential aspirants in the 2023 elections on the platform of the party. The screening took place at Legacy House, Plot 2774, Shehu Shagari Way, Maitama, Abuja.

Answering questions from a battery of journalists after his screening, Gov. Emmanuel expressed optimism that he would fly the party’s presidential flag at the end of the day. He saluted the party for instituting the primaries, describing it as the right step in the right direction and a process that will entrench internal democracy within the parties as well as deepen the democratic culture in the country. He said the primaries have exposed the array of stars within the PDP, adding that Nigerians will not be disappointed as they pitch their tent with the party in the 2023 elections.

Asked to comment on the stance of the Southern governors that the presidency must rotate to the South in 2023 vis-a-vis the insistence of some Northern aspirants to run notwithstanding, the aspirant said he stood with the decision of the party on the matter. ” The party is supreme”, he said.

Gov. Emmanuel has, in the past few days, crisscrossed the country consulting with influential personalities, political figures, party leaders and members regarding his presidential ambition. He has been to Lagos, Cross Rivers, Delta, and Edo states, among others. On Friday, he addressed Southwest PDP leaders at Ibadan, where he was well received by Gov. Seyi Makinde and other PDP leaders from the zone.

![](upload://xaCtN8FeOfgXTn6JaR0vxGeJfkO.jpeg)
Home | About | User Guide | Privacy Policy | Contact Us
Copyright © 2017-2021, NetDivo.
Disclaimer : Every member of NetDivo forum is solely responsible for anything that he/she posts or uploads on this forum.