Few months ago, there were rumors that WhatsApp was working on and also testing a new disappearing message feature. The feature now has been spotted on WhatsApp’s latest Beta version with 2.19.275 as its version number. 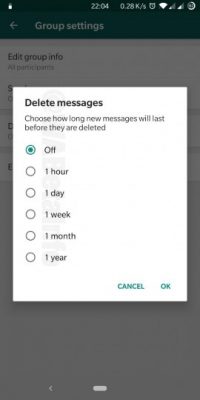 The new WhatsApp feature has been renamed as Delete messages. The purpose of this new feature is to let users set their messages to expire after a selected period of time like an hour, a day, a week, a month, or a year.

The intent behind this feature is to keep group message conversations from taking up too much storage on smartphones. There probably could be other reasons to use the feature. Delete messages for a group chat is only accessible by the group chat’s administrator so the setting would apply to all participants of the group chat. Remember to update WhatsApp to get any of its latest features including this new Delete messages feature.