Below is the summary of ten key provisions of the new ELECTORAL ACT LAW as signed by President Buhari. 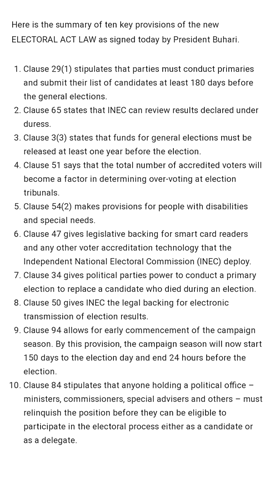 When Was The Electoral Act Amendment Bill Signed?

What is electoral act amendment bill ?

It is a legal framework that paves the way for credible and sound electoral process in Nigeria. The bill improves and engender clarity, effectiveness, and transparency of the election process, as well as reduce to the barest minimum incidences of acrimony arising from dissatisfied candidates and political parties.