Ansu Fati, Barcelona forward has broken a 95-year national record by becoming the youngest goalscorer in Spain at the age of 17 years and 311 days against Ukraine.

Fati who also grabbed the title of the youngest goalscorer in Champions League history and Barcelona’s youngest scorer in La Liga, made a clean 20-yard shot off the post on his first start.

He already won a penalty, scored by Sergio Ramos, making him the youngest player to start a Nations League match.

Ramos added a header in the win.

The Real Madrid defender has now incredibly scored 10 goals in his last 15 caps.

Just like the legendary Alfredo di Stefano, the 34-year-old has 23 goals for his country.

Manchester City defender Eric Garcia, 19, made his debut as a second-half substitute while new City signing Ferran Torres scored a late fourth with a volley at the far post.

Fati, who was born in Guinea-Bissau but moved to Seville aged six with his family, became Spain’s youngest player in 84 years when he made his debut in last Thursday’s 1-1 draw away to Germany.

The previous youngest scorer, against Switzerland in 1925 at the age of 18 years and 344 days was Juan Errazquin.

Ethan Ampadu, who played for Wales against Bulgaria in Sunday’s game, was the previous youngest player to start a Nations League game, aged 17 years and 357 days against the Republic of Ireland in 2018.

Luis Enrique, Spain manager said: "I’m very happy for Ansu (Fati), he is 17 years old, you have to take it easy with him, little by little, he will improve.

"Players of this age need serenity, humility, and that’s what Ansu has already.

"Sergio Ramos is a winner. And the winners are happy when they win. His numbers are beyond the reach of any other player.

“What he brings to this team, that enthusiasm … That’s why he’s one of the best players in the world at his position.” 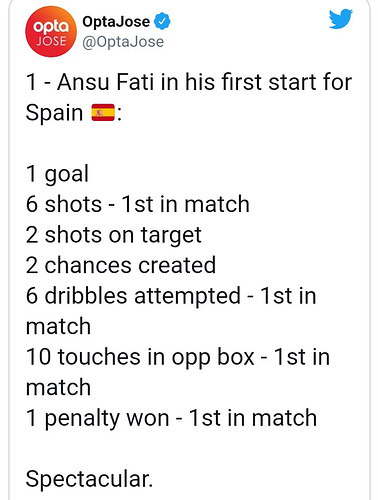