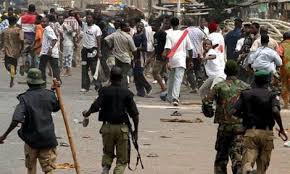 The Anambra state government has imposed a three-day curfew on Aguleri and Umuleri communities in the Anambra East local government area of the state following the fight between members of the community over a parcel of land.

The agelong fight between both communities erupted this morning as cars and a house were burnt by the warring parties.

A statement released by the spokesperson of the state police command, Mohammed Haruna, says the situation has been brought under control.

Haruna said no life was lost in the incident neither was anyone injured. He added that one building, four vehicles, and two motorcycles were set ablaze by the warring factions.

He said the state Commissioner of Police, CP John B.Abang, has directed the State CID Awka to carry out a discreet investigation in order to ascertain the circumstances surrounding the incident and bring perpetrators to book.

Meanwhile, a statement released by the state government says the curfew will last from 7pm to 7am daily, beginning today Saturday, 16th January 2021. The statement adds that the curfew in the first instance will last for three days and that violators would be prosecuted.