A number of Fulani herdsmen who were heavily armed have gone ahead to chase away some local farmers in Alagbaka extension area of Ondo State after vandalizing their farmlands. Adetunji Adeleye, Commander of the Ondo State Security Network Agency, codenamed “Amotekun Corps”, revealed this in an interview on Tuesday.

Adeleye narrated that more than eight separate farmlands with maize and cassava crops were destroyed by the Fulani herdsmen.

"On seeing the owners of the affected farmlands, the heavily armed herders attempted to kill them, but the farmers ran for their dear lives,” he said.

The reports made by the helpless farmers got to the Amotekun Corps.

He revealed that the Corps, in a joint security network with the Agro-Rangers of the NSCDC, immediately visited the area and that the herdsmen attacked the security agencies as they got there but ran after they were overpowered.

He revealed that a total of 42 cows belonging to the herdsmen were later seized by the Corps.

As he condemned the herdsmen’s attack, Adeleye vowed that they would be made to pay for the damaged they caused and subsequently face prosecution.

Olawale Aluko, who was one of the attacked lamented about how the armed herdsmen had been destroying their crops. Aluko pleaded for help to stop the constant attacks and harassment. 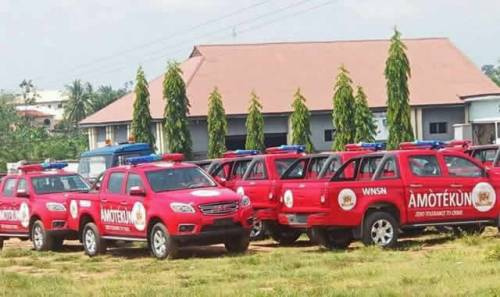